This Luxurious Spanish Extra Virgin Olive Oil is made with the Finest Arbequina Olives. Proudly boasting a 2 Gold Star Award at the 2015 Great Taste Awards, Spanish Passion Extra Virgin Olive Oil has a unique authentic quality making it the perfect choice for creating traditional or contemporary Spanish-style cuisine and Tapas.

The Great Taste Awards Judges said “Bright green & gold colour, fresh citrus and grassy notes on the nose, delicate fruit on the palate, with a hint of nuts. A lovely rounded flavour like melted butter with peppery notes.”

About Spanish Extra Virgin Olive Oil.
50% of all the world’s Olive Oil is produced in Spain. This means one out of every two bottles of olive oil contains Olive Oil from Spain. Spain boasts more than 340 million olive trees and has the largest man-made forest in the world, making it the industry leader worldwide. The olive-tree plantation in Jaen alone contains a staggering 64 million trees spread over half a million hectares, making Jaen the biggest producer of olive oil in the world by far.

Around 78% of the agricultural land in the area is reserved for olive trees, with picual trees the most commonly grown.

Spain is also the global leader in organic extra virgin olive oil production, exporting almost 70% of its production each year, which is sold in over 172 countries around the world.

Olive Varieties
Spain grows more than 260 varieties of olives, enabling Spanish olive oil to have the widest array of flavours and distinctly different aromas. This is good for both the consumer and the planet, promoting biodiversity and ensuring that within the wide variety of Spanish olive oil consumers can find one that is a fit for their specific taste.

Only logged in customers who have purchased this product may leave a review.

close
close
Start typing to see products you are looking for.

All our foods are produced in many different regions of Spain using traditional methods, made in small batches by true Artisans who only use the very best and freshest ingredients to create food bursting with flavour and taste with many of their recipes handed down from previous generations, all having a Passion for Great Food! 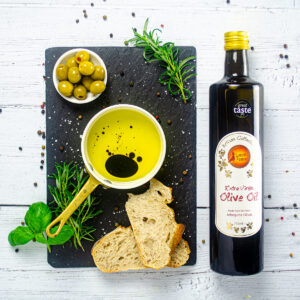